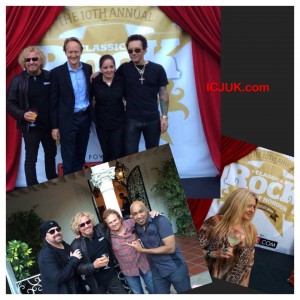 Claire Jane attended the launch party for The Classic Rock Roll of Honour, scheduled for November, in Los Angeles. Now in it’s 10th year, this prestigious music awards show is coming to America for the first time this year. The Avalon in Hollywood is the venue hosting this event, and Classic Rock magazine has enlisted Sammy Hagar as this years host for the November 4th show.

The launch party in Los Angeles, held August 13, 2014, was an event with an impressive list of local and international celebrities including Sammy Hagar, British Consul General Chris O’Connor, and of course Claire Jane Vranian of ICJUK. The awards show is sure to bring it as Sammy Hagar tells USA Today that he plans to “put [the show] on the map alongside the Grammy’s” by packing in “many off-the-hook music moments.”

Definitely something to look out for early in November.